Using APRS along the Ohio and Pennsylvania Turnpikes

On a trip from Maryland to northern Ohio I wanted to give relatives an idea where I was along my travels. For this I fired up my Argent Data Systems Tracker2 and Kenwood TM-V71A. For the entire drive, I ran the Kenwood at 10W and transmitted on the Automatic Packet Reporting System (APRS) frequency of 144.390 MHz as K8ESR-9. The outcome was much improved over past trips do to better coverage by digis and I-Gates. In previous trips, I could drive an hour and a half without a packet being received at an I-Gate. As can be seen in the aprs.fi plot, this is no longer the case. I'd like to thank the amateur radio community for improving the coverage by adding digis along this heavily traveled route.

As a side finding, I discovered that I do need to look at my setup. Unless I unknowingly have a car-airplane hybrid then I think there could be an issue with the GPS. At least one transmitted packet shows the speed to be 219 MPH. The elevation at that point checks out but the speed... uhmmmmm, suspect. 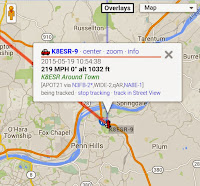 As always, your results may vary depending on radio and antenna setup but when traveling on this part of the turnpike you'll have decent coverage for most of the drive. Happy travels!