Today was a mix bag of land and sea activities. We spent the morning on land to give the kids some non boating playtime. In the morning there was some decent wind so we decided to head out of the marina to do some sailing. Poof, there went the wind. After putting the sails up we achieved a whopping 1 to 2 kts of speed. We were able to get some slow sailing in today but after the wind decreased to the point that we were making half a knot of speed we dropped the sails. The decision was also prompted by the storm building on the west side of the bay. Back to the marina!

The main adventure of the afternoon was many of us being 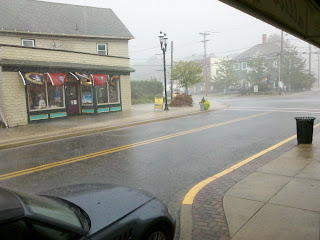 caught by a rapidly building and fast approaching storm. My child and I were trapped in on the main street of the town. After trying to stay dry and failing next to someone's garbage cans I made the run to the other side in hopes for a dryer location. After about 30 minutes of standing on a porch we headed back to the boat only to find that we were not the only members of our crew trapped by the storm.

It wouldn't follow the tone of the these posts if I failed to say that our sewage tanks were full from the start - Oh yeah, stinky. The current theory is that the cleaning crew may have filled the sewage tanks with water thinking it was the fresh water tank. I do wonder what they put in our fresh water tanks.

Tomorrow is our last day on the bay. Hopefully we will find some wind and no other issues. 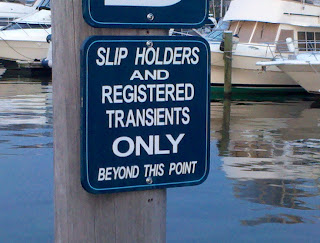 I do want to give a shout out to Rock Hall Landing Marina. They have great facilities (bathroom and pool), helpful staff, and excellent wireless even at the end of the dock.
Posted by Erik Russell at 12:27 AM

Email ThisBlogThis!Share to TwitterShare to FacebookShare to Pinterest
Labels: Sailing